I was flying home from giving a keynote speech about accessibility at a tech conference recently. The airline gave me hassles about providing appropriate space for my service dog. While I’ll refer to some parts of the incident, I won’t go into the details here. But it made me think about airline policies for traveling with a service dog.

I was flying American Airlines. The conference had booked our flight months ago, and I contacted American Airlines’s “special needs desk” to discuss seating arrangements well ahead of travel, twice. I was asked about the breed of my dog (Labernese), and how much he weighs (32 Kg, or 70 pounds). I was asked what he does to help me. At no point during this conversation was I told about American Airlines’ policy about service dogs. I have since looked up the policy. It states:

Service animals, including emotional support animals, are welcome at no charge if they meet the requirements. They must fit on your lap, at your feet, or under the seat, and cannot block the aisle.

We were told a similar thing by several of American Airlines staff **after** we had boarded the plane. It was also suggested we should have purchased an extra seat to make space for the dog. I was told in a follow up call by an airline employee that their regulations follows the requirements of the Air Carriers Accessibility Act (ACAA).

I have read the ACAA very carefully, specifically for any items related to service dogs. I have outlined the relevant sections below. At no point does the ACAA state that a service dog needs to fit in the passenger’s lap or under the seat. It does say that a passenger with a disability may bring on board an assistive device provided it can, among other requirements, stow under the seat. But a service dog is not an assistive device.

Even if the ACAA had a requirement for stowing a service dog under the seat, that law was written nearly 10 years ago. Airlines have, since then, packed more and more seats in planes. There is less and less space between seats. There is less and less space under seats. To the point that it’s not unusual to hear complaints from passengers that they can’t fit their small carry-on personal items under the seat, let alone put their feet there as well. For example, Dave Stokes points out that he can’t fit his backpack under the seat. In the news last year was How American Airlines is going to fit 10 more seats on their planes – and it had to do with reducing the amount of space between seats.

So they expect a service dog to fit under the seat, hence take no more space than 18″ by 14″ by 8″. Here’s a photo of my dog and the space available under the seat. I did not measure it, but it doesn’t even look as big as the dimensions for carry-on personal items. 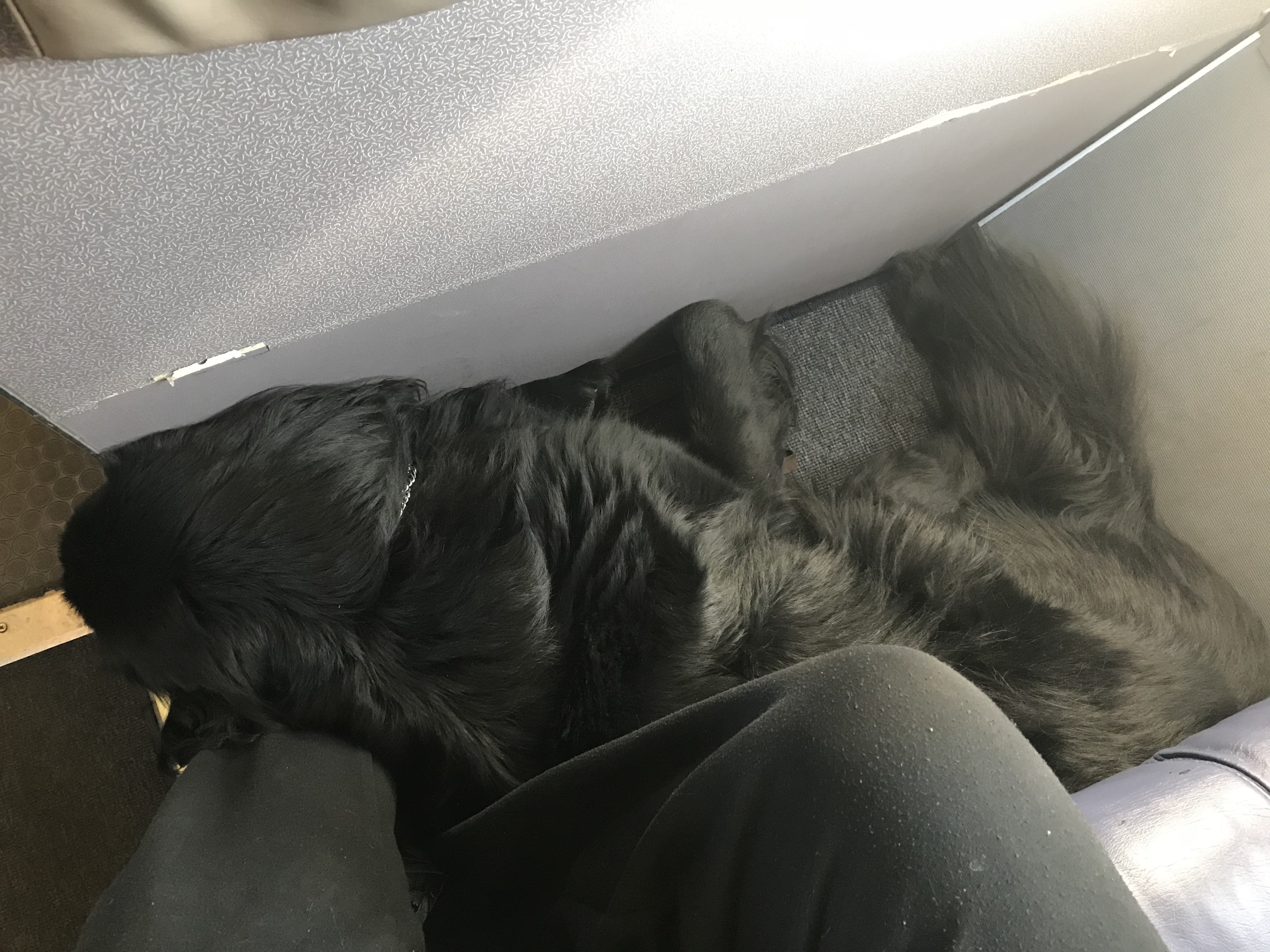 They transport [pets in crates/kennels in the cabin. That policy states that:

Pets must be able to stand up, turn around and lie down in a natural position in their kennel

A similar policy for transporting dogs in cargo states:

Kennel should be roomy enough for your pet to stand and sit erect without your pet’s head (including ears) touching the top. Your pet must be able to stand, sit and lay as they normally would.

I cannot comprehend how the airline could insist on kennels or crates big enough for an animal to stand up, turn around and lie down in a natural position, for their well being, yet insist that a service dog must be able to fit at one’s feet or under the seat. Especially considering the ludicrously small amount of space they provide there. As for holding my Labernese in my lap, well, that’s a ludicrous idea!

Transporting a dog in cargo

But it gets better. Let’s pretend for a moment that I don’t need my dog immediately before, during and after the flight. And let’s also pretend for a moment that the experience of traveling in cargo wouldn’t be traumatic enough to my service dog that it could risk ruining him and making him unable to continue working with me. Let’s pretend those two things, and entertain the possibility that I might ship him in cargo.

I could not travel out of Canada for most of the winter season. I couldn’t fly into many areas of the United States either. Because American Airlines’ Temperature policy states that if the temperature at any of the city along the route is between 20 F and 45 F (-7C and 7C), I must provide a medical certificate dated within 10 days of travel to prove my dog can handle that temperature. If the temperature is below 20 F (-7C), they simply won’t transport any animal. This is good – it protects animals. But it means that I couldn’t travel with him in cargo in winter.

But that isn’t the only problem. American Airlines won’t transport a dog in cargo on the same flight as its human if the combined weight of animal and container exceeds 100 pounds (45 Kg). My dog weighs 70 pounds. That leaves 30 pounds for a crate that is big enough and solid enough to safely transport him. Good luck finding such a crate. Airline-safe crates are heavy things. A quick search on Amazon shows the weight for a crate suitable to my dog to be over 50 pounds.

So, I can’t fit my dog under the seat. I can’t transport my dog in cargo. That leaves the option of having to purchase an extra seat. Let’s pretend that’s not discriminatory practice for a moment. Many airlines state that you must provide a passport number to purchase a seat for an international flight. Do I need to get a passport for my service dog (do note he’s already certified and registered and I have the documentation to show that). I can imagine the look on the clerk’s face when I submit my dog’s birth certificate along with a passport application! I know, it sounds absurd. But the entire thing verges on the absurd already.

What’s the airline’s liability for the dog if he gets injured? Airlines have guidelines to repair or replace damage to suitcases and other things you transport with you, including mobility devices like wheelchairs. But the stated liability is rarely over $2,500. Service dogs cost about $30,000 to train. And the waiting lists for a new service dog is generally over 2 years. Will the airline pay for a new dog if their requirements force the animal in a situation where they are injured or ruined?

What’s more, who would pay the fees and when? Airlines are notorious for taking their time in paying for, or covering damage to mobility devices. Except that an injured dog needs immediate care and veterinary attention. Immediate and/or emergency veterinary fees can cost a lot of money.

American Airlines stated that they don’t have to provide an extra seat for a service dog. They stated that if a flight isn’t full, they’ll try and accommodate. But when pushed, they confirmed that the only way to know if someone can get on board with a service dog with a suitable seating arrangements is at the gate, after having checked in and gone through security.

There are many plane travel related actions I can’t do like everyone else because I’m a wheelchair user and I have a service dog. For instance, I cannot do online check-in. And I have to show up at the airport to check-in an hour before everyone else.

I can’t even be certain that I’ll be able to fly to my destination at the scheduled time. Because American Airlines staff have told me that until I’m at checked in and at the gate, they won’t know for sure if they can accommodate my needs. That is despite booking a flight months in advance. Despite having made arrangements with their special needs team weeks or months in advance.

This is discrimination. Plain and simple.

§382.121   What mobility aids and other assistive devices may passengers with a disability bring into the aircraft cabin?

§382.81   For which passengers must carriers make seating accommodations?

§382.27   May a carrier require a passenger with a disability to provide advance notice in order to obtain certain specific services in connection with a flight?

§382.117   Must carriers permit passengers with a disability to travel with service animals?