Traveling by plane when you are a wheelchair user can be quite an adventure. It was not that long ago that it was announced on an airplane intercom that the flight was being delayed because of a "handicapped passenger".

So, @wendywings was saying on twitter that her husband one time was the last person to board a plane, and everyone else clapped him! Funny story, but it reminded me of another story, which makes you laugh because it is so absurd.

I was flying within the United States, I don’t remember where I was going, nor where I was coming from. I do remember that I was transiting via Atlanta, GA. When I have to transit, I always make sure I have a good amount of time between flights. I aim for anywhere between 90 minutes and 2 hours, like that if there are flight delays or other "technical issues", I can still make my plane. And there are glitches more often than not.

Here’s the thing, when you travel in a wheelchair, and are unable to walk, you can’t get to your seat by yourself. The aisles are *way* too narrow for your wheelchair. So they have a narrow aisle chair, which is often called a "straight back". It’s full of straps, and has either 2, or 4, wee wheels. Once you’re in the straight back, you’re entirely dependent on people. They can carry you up steps, use a lift to bring you to the plane’s door if there’s no gangway, and generally get you to your seat. 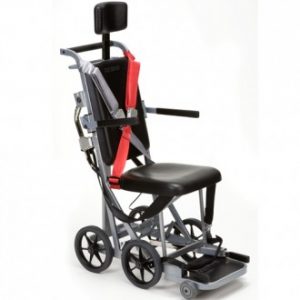 These aisle chairs have magical abilities. You see them a lot beside gates when you don’t need them. But the moment you need one, it seems that they are all in use, or the only available one is on the other side of the airport. Or there’s an aisle chair but no porter, and the Union forbids flight attendant to handle passengers in aisle chairs, or some such.

On that day, I arrived on time with the incoming flight, managed to get off the plane in a relatively timely manner, and high-tailed it all the way through Atlanta’s airport as fast as I could, with Wix, my service dog enjoying the mad dash. I love to see her run, while wagging her tail, and having what I interpret as a big grin on her face. We arrived at the departure gate well on time, before they started boarding people. I went up to the staff at the gate and told them I was ready to go when they were. They looked surprised. They didn’t have any information on their system about a "wheelchair bound" passenger. Despite my having booked both flights at the same time. Despite the first leg of the trip having that information about me. Despite the pilot of the first flight offering to contact the other flight to make sure they were ready for me. Somewhere, something went wrong.

The gate staff asked if I could walk. I said no, I need an aisle chair. They said ok. Asked me to go wait in designated area. 20 minutes later, they started boarding the plane. Usualy, they board passengers requiring assistance first. Like families with small kids, older folks, and people with disabilities. They didn’t call for me before they loaded people up. Curious, I went to ask at the counter. "Oh, sorry sir, we got sidetracked and forgot you needed asssistance"!!!! By this time I’m thinking "WTF", right? They assure me that they’ll board me once everyone is in. As I haven’t seen an aisle chair anywhere, I remind them that I’ll need one. I am told everything is under control.

I get back to my waiting spot. See the last of the passengers go in. Still no sign of an aisle chair. No sign of porters either. Back to the counter for an update. Apparently they are having trouble finding an aisle chair. This is now about an hour *after* the pilot from previous flight contacted them to let them know about me. Surely in an airport the size of Atlanta someone could find a piece of equipment used daily?

The staff decides to let me through so I can wait down the gangway, right at the plane’s door, to hurry up the process when they arrive with the aisle chair. The plane was supposed to have left 25 minutes ago by now.

Finally, a few minutes later, a couple "dudes" show up with the magic chair, I get myself transferred and they wrangle me on board. Just in time to hear the pilot make an announcement on the plane’s intercom:

"Folks, our apologies for the delay before departure, we’re having problems with a handicapped passenger."

Yep. The captain announced to all and sundry that the delays were my fault, as I was being wrestled on the plane. He implied I was causing problems. ALL eyes were on me, glaring. Others looked away. Talk about being made to feel really unwelcome, stupid and unhappy.

To be fair, *most* airline employees I encounter are kind, helpful and professional. It is just unfortunate that when I have a bad experience, it’s a *really* bad experience.

3 thoughts on “Last One Aboard The Plane”