I went out to dinner with a group of friends and colleagues yesterday. We intended to eat at Pappadeaux. Something Bad happened and neither the restaurant manager nor his staff were willing to do anything about it. As a result, we went somewhere else and we ended up having a great evening! 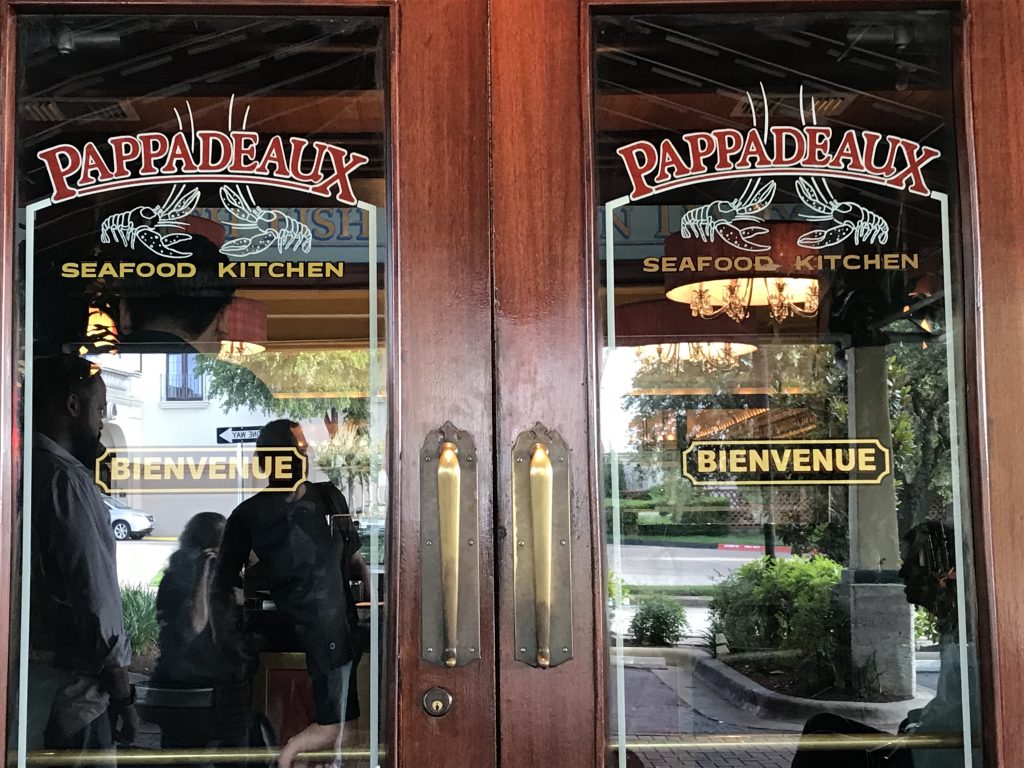 The main door of Pappadeaux’s I-35 Austin location

I was waiting for our table to be ready at Pappadeaux on I–35 in Austin, TX. I was with ten friends and colleagues. I was sitting in the waiting area besides another group of patrons, with my service dog laying down beside me. A man walked in with an elderly woman. They headed towards the Hostess’ desk. He was not looking at where he was stepping and he stepped on my dog’s leg. I’m glad that my dog was not hurt. The man did not have a real chance to put weight on the dog’s leg because I saw it happening a split second before it did. I reached out with my hand and said “Mind the dog”.

He glared at me and went to speak to the staff at the desk. They were seated at a table, and he walked back towards the exit.

On his way out, he bent down so his face was really close to mine. He yelled aggressively:

If your dog is in the way, get the fuck out, asshole!

This was a verbal assault I did not expect. My adrenaline immediately went up. I refrained from reacting. But inside, I felt devastated. Not only did the guy step on my dog, and didn’t apologize, but he then abused me.

A random stranger sitting beside me, who had just been commenting on how well behaved and cute my service dog is, was getting up to go talk to the aggressor, but his wife stopped him. A colleague of mine did follow the guy to talk to him about what had just happened.

While this is happening, I counted 5 Pappadeaux staff standing around, witnessing everything that happened, but not doing anything about it.

The hostess decided to get me seated even though some people in our party had not arrived. My colleague asked to speak to the manager – He wanted the man removed. Attacks on people with disabilities are not appropriate and a business that sees it happening should do something about it.

Given the (lack of) reaction from Pappadeaux, someone in our group suggested we should just go eat elsewhere. And so we did!

On the way out, we asked to speak to the manager directly. The manager’s name is Christopher Ashley. My colleague explained to him why we were leaving. He reiterated that for Pappadeaux to do nothing about a client verbally assaulting another customer is particularly poor practice.

I’m not kicking anyone out.

He added that he’d listened to both sides and he didn’t believe there was anything for him to do. He was saying this to my colleague without even looking at me. I was sitting 6 feet away from him, yet he completely ignored me. This is symptomatic of his attitude towards people with disabilities – we’re not worth talking to. It may explain why he thought it was ok for that man to yell abuse in my face in the restaurant.

I pointed out that he had not, in fact, listened to both sides as he had not even bothered to talk to me. I did tell him what happened. I pointed out his staff and other patrons had witnessed the whole thing. I said that if a restaurant doesn’t do anything about a patron’s abusive behaviour, they are in fact condoning it.

Neither Mr. Ashley nor his staff apologized. We left.

Pappadeaux missed out on the revenue from 11 patrons that night. One of the people in our group is the director of a local non-profit located a few blocks from the restaurant. She used to regularly take people to this restaurant. She will no longer patronize this restaurant. She also knows several business individuals in the area and has stated she will encourage them not to go there anymore.

The day after the event, I’m still feeling the adrenaline of being yelled at like that. I’m still angry that Mr. Ashley thought it was ok to let abuse happen and not do anything about it. This event is one of many other similar ones that happened to me over the years. A drop in the ocean of unwarranted attacks against people with disabilities. I won’t forget this any time soon.

I would like, at the very least, to receive an apology from Mr. Ashley and from Pappadeaux. I would also like for Pappadeaux’s employees to receive disability awareness training. I will be contacting Pappas’ headquarters about this. And I will update this post with their response, if any.

I received a phone call from Mr. Sean Burns, the Regional Manager, on May 22. He apologized and said how sorry they are about the experience. He stated that they spoke to staff about the situation, including host and management.

He stated You know that the Pappas company and Pappadeaux wants to take care of its guests.

Mr. Burns explained that the person I spoke to was NOT Mr. Ashley. He was a line manager that gave Mr Ashley’s card.

He has invited me to go dine there to give Mr. Ashley a chance to apologize directly. He sent me a gift card so “dinner’s on Pappadeaux”. He also sent a gift card to my colleagues based in Austin. Both my colleagues and myself have just received the cards.

These colleagues asked me if I was satisfied with the outcome, if I they had sufficiently addressed my concerns, and if I would patronize Pappadeaux again.

I do believe Mr. Burns’ apology was heartfelt and genuine. Am I satisfied? I don’t know. I am still upset about the events, even weeks later. I feel the answer was too little, too late. But perhaps the only thing Mr. Burns could do in the circumstances. Would I patronize Pappadeaux again? At least once, to receive in-person apologies from the staff there. But there are enough good restaurants out there that I probably would not chose that establishment as a first choice.

My colleagues in Austin are currently deciding how to best use the card: A raffle, inviting a dozen service dog owners to dinner, or???